Mike Tyson versus Brock Lesnar Fight of the Century!!! 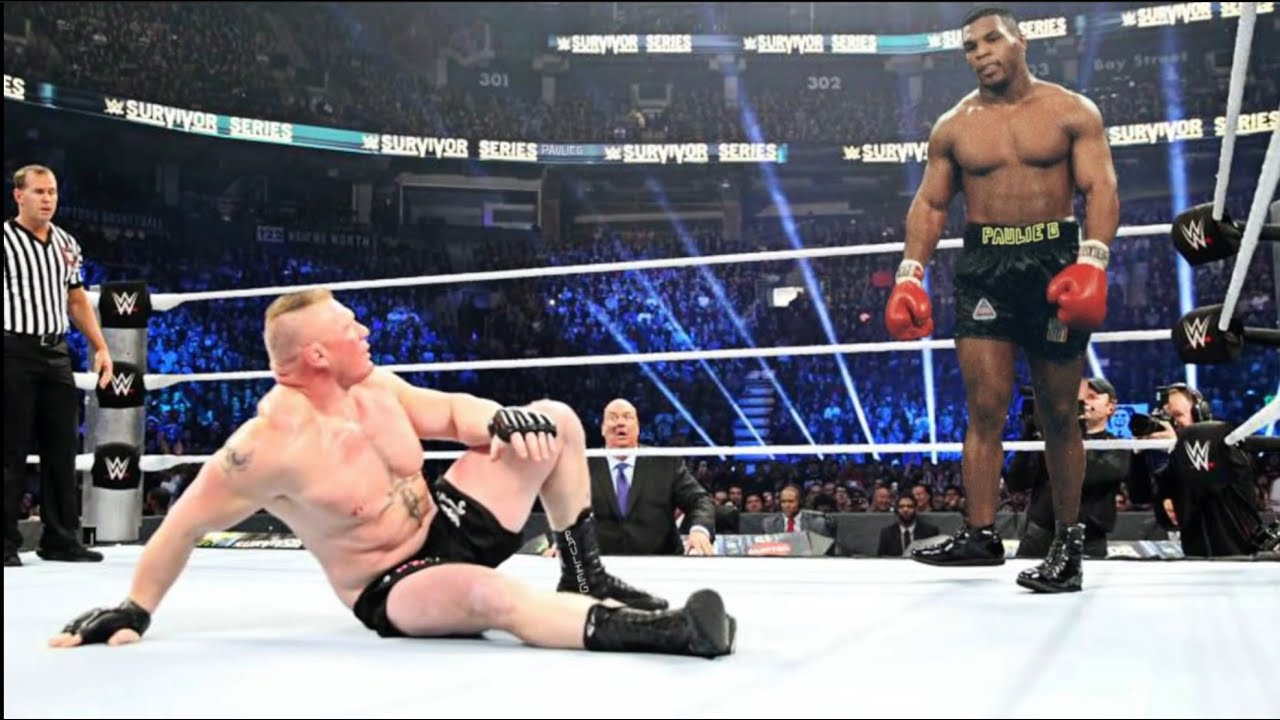 Brock Lesnar Bio:
Brock Edward Lesnar is a popular American wrestler, football player, and mixed martial artist. Currently signed with ‘World Wrestling Entertainment’ (WWE), he is the former ‘WWE’ universal champion. Born and raised in Webster, South Dakota, Brock became an amateur wrestler and a skilled footballer while he was in high school. He was a two-time state champion in amateur wrestling. He joined ‘WWE’ in 2000 and became the youngest ‘WWE’ champion at the age of 25. He also became the second quickest wrestler to win the championship in ‘WWE’ history. In 2004, he put his wrestling career on hold to pursue a career in the ‘National Football League.’ He signed with the ‘Minnesota Vikings,’ and played several preseason games for the team. In 2006, he also joined K-1’s mixed martial arts league. Apart from making a cameo appearance in the American biographical sports crime drama film ‘Foxcatcher,’ Lesnar has also been featured as a cover athlete for many video games, such as ‘WWE SmackDown! Here Comes the Pain,’ ‘WWE 2K17,’ and ‘UFC Undisputed 2010.’ Lesnar was once arrested on suspicion of possessing anabolic steroids. The charges were dropped when the drugs were ascertained as legal growth hormones.

Brock Lesnar was born on July 12, 1977, in Webster, South Dakota, USA, to Stephanie and Richard Lesnar, who owned a dairy farm. He has two older brothers named Chad and Troy, and a younger sister named Brandi.
He attended ‘Webster High School,’ where he used to play football. During his senior year, he competed in amateur wrestling, where he came third in the state championships. Later, during his sophomore year, he won the ‘National Junior College Athletic Association’ heavyweight wrestling championship. He then went on to win the ‘National Collegiate Athletic Association’ (NCAA) ‘Division I’ heavyweight wrestling championship during his senior year.

In 2000, Brock Lesnar officially signed with ‘World Wrestling Federation’ (WWF), which was renamed ‘WWE’ in 2002. Initially, he took part in tag team matches after joining hands with Shelton Benjamin, a former college friend. They won the ‘OVW Southern Tag Team Championship’ three times.
Over the next two years, his skills developed, and in 2002, he won the ‘King of the Ring’ tournament after defeating well-known wrestlers, such as Bubba Ray Dudley and Rob Van Dam. He then defeated ‘WWE’ undisputed champion The Rock, after which he claimed the title for himself, becoming the youngest ‘WWE’ champion at the age of 25.
Putting his wrestling career on hold in 2004, he decided to pursue a career in the ‘National Football League.’ Despite not having played football since high school, and having suffered an injury, he played for ‘Minnesota Vikings’ in several preseason games. Later, he was invited to play in ‘NFL Europe,’ but he declined the offer as he didn’t want to leave his country.
He took part in ‘New Japan Pro-Wrestling’ in the year 2005. He emerged victorious and became one of the few American wrestlers to have won the ‘IWGP Heavyweight Championship.’ He successfully defended the title against many wrestlers, including Japanese sumo wrestler Akebono, and held the title for around two years.
In 2006, Brock Lesnar announced his desire to join K-1’s mixed martial arts league, after which he trained at the ‘Minnesota Martial Arts Academy.’ Soon, he signed a deal with the ‘K-1’ promotion and won his first match against Min Soo Kim.
He took part in ‘UFC-77,’ a popular mixed martial arts event, and emerged as the new ‘UFC’ heavyweight champion. After defending the title successfully against several wrestlers, he fell ill for a long time. It was later found that he was suffering from mononucleosis.
In 2012, he returned to ‘WWE.’ He was seen facing John Cena for the ‘World Heavyweight Championship’ in 2014. The match resulted in a victory for Lesnar, who emerged as the new champion.
In 2017, he won the ‘WWE Universal Championship,’ after defeating Bill Goldberg. He became the first man ever to win both ‘WWE Championship’ as well as the ‘WWE Universal Championship.’
After winning the ‘Universal Championship’ in 2017, Lesnar held on to the title for more than 500 days, one of the longest world championship reign in modern era. Losing the title after 504 days at ‘Summer Slam’ against Roman Reigns, he then regained the title in 2018 after defeating Braun Strowman.

America’s Got Talent: What All The Winners Are Doing Now